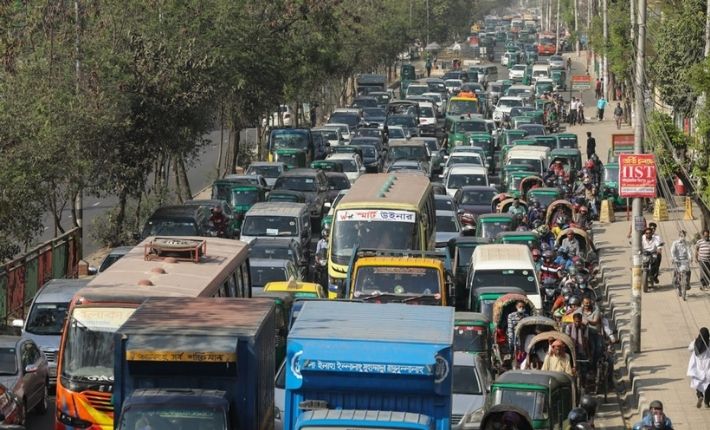 Traffic jams are getting worse in Dhaka city nowadays. The overall temperature of this city has also increased. These two things together make this Ramadan intolerable for Dhaka residents.

On social media, hundreds of passengers are expressing their anger about the holy month’s traffic, many of whom say they are forced to eat their meals on the road because they couldn’t get home in time.

This year’s traffic jams are exacerbated by the fact that schools are scheduled to remain open until April 20.

For the first time since the COVID-19 shutdown began, schools will be open throughout the holy month of Ramadan to make up for a lost time. Thus, students have contributed to both the morning and evening rush hours.

Mahte Hamza Plabon stated this in a post yesterday on the popular Facebook group Traffic Alert. On the way to work at 5:40 p.m., I got out of the vehicle and prayed to Chairman Bari. My automobile was still stranded in the middle of Banani Road 11 “after I had finished praying.”

At 6:35 p.m., the automobile arrived at Setu Bhaban, where he ate iftar on the overbridge.

At the beginning of April, Dola Rahman, a University of Asia Pacific student, began a new internship. To make it to work on time yesterday, I had to endure quite a bit of suffering. To go to Niketan, I initially boarded a bus, but the route was congested. The bus has completely stopped moving. After a while, I decided to skip the bus and instead order an Uber bike. If this traffic doesn’t improve, I’ll have to find another place to live for the next 6 months.

In a post on Traffic Alert, Afrin Sadia, from Dhanmondi, Bangladesh, is seeking a carpooling companion.

My journey is becoming increasingly challenging, and I’m severely in need of a reliable travel companion. This is the third time in the last several weeks that I’ve walked 10 kilometers from work to my house, and it’s drained my life force out of me, “she added.

One respondent, Shahnawaz Khan, argued that walking was better than being caught in traffic, while another advocated for her to be allowed to work from home at least through Ramadan.

Shyamoli, from Siddeshwari, is the destination of choice for Shapath Guha.

Many others indicated an interest in carpooling in response to their posts. Many people were upset with the traffic system as well as with the city’s management.

Authorities say that the traffic jams were caused in large part by construction projects that were going on at the time.

At Gulshan, the Tejgaon Industrial Area, the Green Road, Moghbazar, and the Motijheel to Mirpur stretch, construction work is still ongoing. There are cars parked everywhere, even though the streets are generally calm and deserted around Iftar.

According to Robiul, a bus assistant on the Airport-Bangabandhu Avenue route, “we would require more than an hour to reach Banani since the road conditions are terrible and the number of buses on the streets has grown, creating extra traffic congestion.”

Moghbazar is where I’m headed. Now that I’ve been waiting for this signal for more than 15 minutes and am expecting to be here for at least another 45 minutes, Barkatullah, a rickshaw driver on Panthapath in the evening, had this to say.

Basundhara City Shopping Complex is the only point of origin for this traffic. Shopping has become a popular pastime among the general public. “It’s exhausting,” he replied with a faint grin, adding that he couldn’t stand to wait.

Tasfiq Zaman, a private job holder from Mohammadpur, claimed that every day he had to travel to Saat Rasta for work and that it was a new battle for him.

Every year around this time of year, they begin this sort of building project. However, if schools and universities are shut down for a month, “traffic will be a little less congested,” she said. He also accused the cops of a lack of highway maintenance.

“The situation is worse than the previous year since academic institutions are open this year,” said Anowar, a traffic police officer at Dhanmondi 27. Maintaining the pressure on automobiles is really difficult for us.

He stressed that “no remedy will come if the government raises the number of road traffic officers,” because our roads cannot sustain this load.