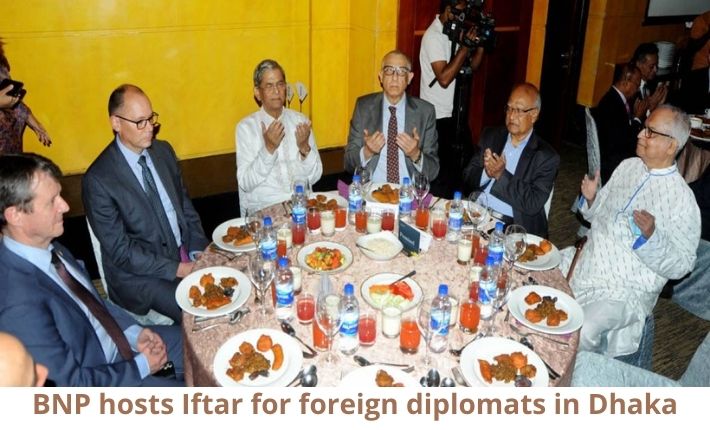 The Bangladesh Nationalist Party (BNP) hosted an iftar program for the diplomats deployed in Bangladesh. Mirza Fakhrul remembers that BNP Chairperson Khaleda Zia hosted an Iftar for diplomats during Ramadan every year.

He made the comments while holding an Iftar party for diplomats working in Bangladesh at a city hotel.

Mirza Fakhrul spoke with the guests before the iftar. On the show, Tarique Rahman, a former BNP vice-president, thanked the international guests for coming.

Mirza Fakhrul stated that BNP Chairperson Khaleda Zia used to throw an Iftar for foreign diplomats every year during Ramadan. However, she has been placed under home arrest, “he continued.”

The former prime minister called on everyone to work for Khaleda Zia’s total release from prison and the return of democracy to the nation.

Before the iftar, a munajat was said for peace and prosperity for the country and its people.

At the meeting, Ambassador Nathalie Chuard of Switzerland and Ambassador Espen Rikter-Svendsen of Norway were among the other diplomats in attendance, as were others from the European Union, as well as the UNHCR, the UNDP, NDI, and Democracy International. The British High Commissioner, Robert Chatterton Dickson, and the Indian High Commissioner, Vikram Kumar Doraiswami, also took part in the program.